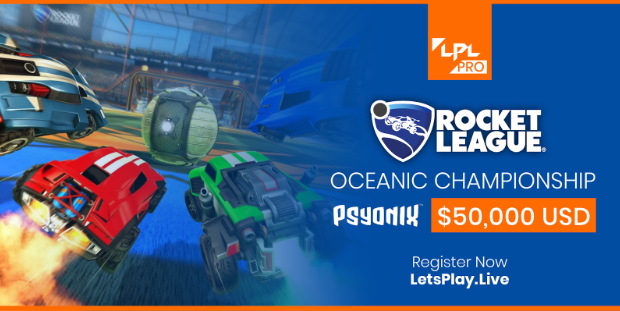 The tournament, sponsored by Psyonix, serves as the official pathway for Oceanic players into Season 8 Rocket League World Championship. A prize pool of $50,000 USD is on offer for top-placing teams, as well as $5,500 USD in player accolades for the League Play MVP, Golden Striker, Savior of the Season and Clutch Playmaker.

Tournament Information
Open Qualifiers will run over two days: 14th and 15th September 2019 to determine the current top six teams in the region. These six teams will join the remaining two auto-qualified Oceanic teams from Rocket League’s previous Season 7 World Championship in seven weeks of round-robin league play, which will result in a Regional Playoff at LPL Studios in Auckland on November 16th to determine our Season 8 Oceanic Champion!

The champion and runner-up team will head to the Season 8 Rocket League World Championship between December 13-15 to represent the OCE region on the global stage!

Oceanic players currently residing in the Oceanic region (including New Zealand, Australia, South-East Asia and the Pacific Islands, full list available below) who are over 15 years of age are eligible to form a team and enter the Open Qualifiers.

Prize Pool and Player Accolades
Thanks to Psyonix, a prize pool of $50,000 USD is up for grabs with an additional $5,500 USD for player accolades!

We highly advise players join the LPL Community Discord to quickly receive the most up to date information! Click the Rocket League reaction in #get-roles and chat in the #rocket-league channel.

Register
Registrations are open now! By registering, you agree to abide by the rule-set found here. If you are a minor, then your parent/guardian agrees on your behalf.

League Play
Once the Open Qualifiers have concluded and the top 8 teams (top 6 teams from Open Qualifiers and two auto-qualified Oceanic teams from Rocket League’s previous Season 7 World Championship) have been confirmed, LPL Admins will contact all Qualified teams to join a separate LPL Pro Rocket League Discord for further communication regarding the League Play schedule.

League Play will be every Sunday from 29th September until 10th November (7 weeks) at 12:00PM NZT/10:00AM AEST @ twitch.tv/lpl_play. All games will be broadcast.

The Oceanic Champion and Runner-up team will then proceed to the Season 8 Rocket League World Championship held on 13-15 December 2019.

Accommodation and Return Flights to Auckland, New Zealand for LAN Regional Playoff will be provided by LPL (T&C’s apply).

Connect with us
On behalf of the entire LPL Admin Team, we would like to wish every team competing the best of luck for the next coming weeks. For any questions, do not hesitate to ask by either posting in the forum announcement, or contacting an admin via Support Ticket. Alternatively, you can join the community Discord channel.